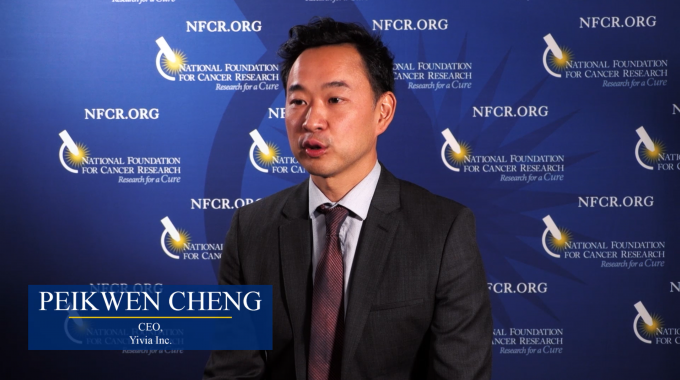 Mr. Peikwen Cheng is Co-founder and CEO of Yiviva, a biotechnology start-up that develops first-in-class therapeutics. The company developed YIV906, an herbal mixture based on an 1,800-year-old Chinese formula.

A number of clinical studies show YIV906 reduces the harmful adverse side effects of chemotherapy and increases the efficacy of cancer therapies.

The results of these studies, together with years of research at the Yale School of Medicine, helped the company win the Innovation Award at the U.S.-China Health Summit in 2016.

Based on the research of Yale Pharmacology Professor Yung-Chi Cheng, Ph.D., Yiviva develops botanical medicine-inspired therapeutics to treat chronic diseases and cancer. Dr. Cheng also serves as co-specialty chief editor of the Ethnopharmacology section of the journal Frontiers in Pharmacology.

The National Foundation for Cancer Research has provided critical support since 1991 for research coming out of Dr. Cheng’s lab from early experiments and into clinical trials. And, more recently, the AIM-HI Accelerator Fund has been investing in Yiviva’s efforts to develop YIV906 into a cancer drug approved by the U.S. Food and Drug Administration and other nations’ regulatory bodies.

The Yiviva CEO adds that crucial funding from NFCR and AIM-HI have enabled an idea to see real patient outcomes.

“The mission of NFCR is not just to help with early stage funding of research, but now they’re helping us out with mid-stage to later stage,” he stresses. “We believe this funding will really help catalyze the future development of these ideas—especially the more breakthrough, out-of-the-box ideas such as ours, which sometimes need the help of a more visionary investor for support.”

The 2023 AIM-HI Women’s Venture Competition is Open for Applications!

Have you heard? The application for the 2023 AIM-HI Women's Venture Competition is now open…

The AIM-HI Accelerator Fund (AIM-HI), together with our partner organizations, the National Foundation for Cancer…