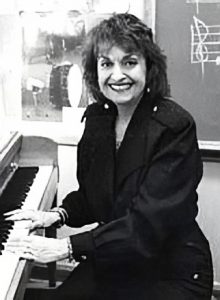 Kathleen Diane Buscemi of Las Vegas, NV, passed away peacefully on August 15, 2020 in Las Vegas, NV. She had been a resident of Babylon Village, NY for more than fifty years. A gift to the Kathleen Dianne Buscemi Memorial Fund is a wonderful way to love, honor and remember Kathleen. It enables us to continue our vital fight against cancers, and it becomes a lasting tribute to her life.

Kathleen was born on February 3, 1943 in Troy, New York to Thomas A. Dandrew and Anna Mae (nee Sartoris) Dandrew. She was the youngest of three children. She attended Emma Willard School and then attained a Bachelor of Science degree at St. Rose College. Kathy earned her Master’s degree from Hofstra University.

Mrs. Buscemi, who had a passion for music, taught thousands of children during her 42 year career in the West Babylon School District. In 1972, she married, Dr. Salvatore S. Buscemi and they raised their two sons in Babylon Village. Her beloved husband died suddenly in 1999. In the years that followed, Kathleen enjoyed spending time with her two sons, Salvatore and Thomas in Manhattan. She also loved to travel all over the world and did so frequently with her close friends.

After retirement, Mrs. Buscemi took talented students, who were looking to become professional musicians and singers under her wing. She felt tremendous joy as she watched them compete nationally on stage and television. Her persistent optimism and smile that became her unique personal signature to all of those around her. Even during her three bouts with cancer and the sudden loss of both her husband and then her youngest son, she made every effort to maintain a positive outlook on life.

Kathleen is cherished by her son, Salvatore M. Buscemi and his wife, Tiffany of Las Vegas, NV. She is survived by her siblings, Joan D. Hansen and Thomas Dandrew. Following a Funeral Mass at St. Joseph’s Church, Kathy will be laid to rest, next to her husband, Dr. Salvatore S. Buscemi, and her son, Thomas N. Buscemi at St. Josephs Cemetery in Babylon, New York.

Donate In Memory of Kathleen