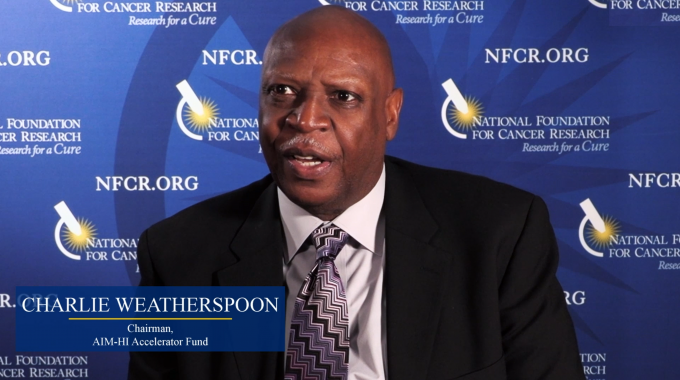 The National Foundation for Cancer Research is a “special organization,” says Charlie Weatherspoon, Co-founder and Chairman of the Board of the AIM-HI Accelerator Fund (AIM-HI), which has a strong relationship with NFCR.

Weatherspoon contrasts the grassroots efforts at NFCR and AIM-HI with larger organizations, and explains that this “bottom-up” approach has been embedded in their visions and missions since the beginning—which, in the case of the former, is its establishment over four decades ago.

“When I first started, no one knew who we were,” he says. “(Individuals, foundations and corporations) that I went to were like, ‘Who are you guys?’ Then we started explaining who we were and what we’ve been a part of, some of the great researchers and scientists that we’ve worked with, and some of the breakthroughs. People began to say, ‘Wow, that’s who you guys are?’ Now, our name is synonymous with cancer and cancer research—and all the breakthroughs and protocols that are going on now.”

Weatherspoon’s vision for AIM-HI is to help cancer research discoveries cross the “Valley of Death,” which for a new oncology drug can be thought of as the gap between laboratory bench and patient utilization.

Many great research ideas have withered and perished in the Valley of Death, which far too often exists primarily as the result of funding shortfalls.

“That’s where you’re just waiting for someone to give you a little bit of money so you can translate your idea to the next level of (clinical) trials, but no one’s putting money there,” he stresses. “My goal for AIM-HI is to serve as the catalyst that moves all the great researchers to translate their important work.”

In today’s marketplace, large companies avoid projects in which they may not make great sums of money. This “blockbuster only” approach to funding means many worthwhile projects—and the important discoveries and treatments they could yield—fall through the cracks.

NFCR and AIM-HI are different from many larger organizations because they consider these smaller projects. These two organizations pay attention to great researchers and companies that are building upon established platforms, making better products for the world and attacking problems in new ways.

In Weatherspoon’s words, and speaking of the researchers and companies which NFCR and AIM-HI support: They say, “Oh, we need to be a part of what these guys are doing and continue the process.”

2021 Highlights: Thank You for Supporting AIM-HI to Accelerate a Cure!

We have great news to share! The 2022 AIM-HI Women’s Venture Competition is Now Open…