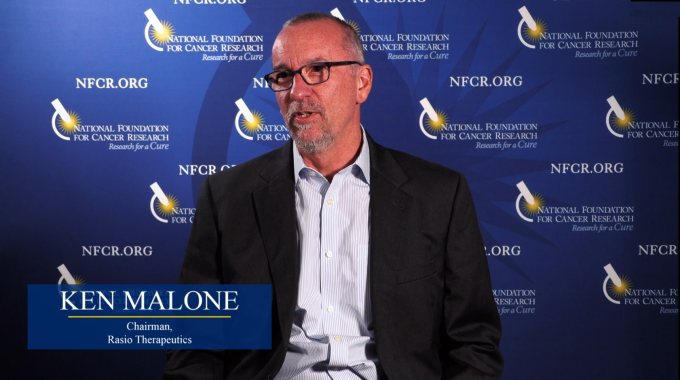 Serial entrepreneur Ken Malone, Ph.D., and his team of scientists and business executives are at the forefront of developing cutting-edge biohealth companies.

Malone is the Chairman of the Board of Directors of Rasio Therapeutics, a start-up which is bringing innovative computational drug design approaches to the development of artemisinin-derivatives and other molecules for the treatment of acute myeloid leukemia and other diseases. The company has been financially supported by the National Foundation for Cancer Research and AIM-HI Accelerator Fund since its 2019 founding—and even before, when core technology was part of Dr. Malone’s Baltimore, Maryland-based SilcsBio.

Historically, researchers design drugs by screening millions of small molecules against proteins to see what might be active. While this approach has worked moderately well for the development of some drugs, it tends to be “hit and miss” for developing cancer therapies.

In contrast, Rasio uses computational platforms, which means it uses advanced programming to design and study target proteins so as to allow for the better allocation of resources towards viable “hits,” rather than those “misses” deemed to be less viable.

“We save a lot of time and a lot of effort in being able to design drugs that way,” Malone says.

Researchers and drug developers are exceptionally good at using chemistry to identify new mechanisms of cancer. Identifying these mechanisms helps them understand which proteins drugs would need to block or inhibit to treat cancer.

However, these same researchers and drug developers often do not have the ability to design drugs that fit into the proteins. Malone’s company uses proprietary computer programs to look at multiple targets quickly.

“We’re really fitting this need to be able to look at many, many different targets in a very rapid, very fast way, to not only identify the best drugs to fit those targets but also the best targets to go after,” he explains. “Doing it rapidly with computers, rather than by very painfully slow and very expensive wet chemistry, we’re able to get to better drugs faster.”

Rasio is working toward creating drugs that turn off cancer but without the side effects generally associated with chemotherapy. Therapies designed to target the specific proteins associated with cancer do not affect the rest of the body, so they cause fewer side effects.

“We’re really focused on getting the best drugs with the most minimum impact, and (NFCR and AIM-HI are) helping to get us there.”